The Thousand Autumns of Jacob De Zoet by David Mitchell 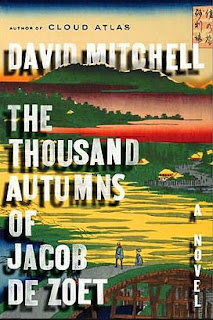 I'm alive! My procedure went pretty well, or so I am told. Not too comfortable, I would add, and if any of you had left notes of concern, I would have thanked you. Anyway, Jackson says that my reviews are too negative, so I decided to write about this book, which is one of my favorites of all time. I re-read it in the hospital to celebrate the fact that they didn't permanently damage my eyesight, even though the doctor looked like he got out of medical school yesterday. He could have been Doogie Howser's younger brother from the looks of him. Without the charisma.

Anyway, this book is wonderful, despite the somewhat esoteric title. In fact, I almost didn't read it because it sounded boring. Maybe a better title would have been, "A Dutch guy goes to Japan and you will not BELIEVE the crazy shit that happens!" OK, so I'm not great at writing titles either. But the point is, it sat on my bedside table for a year getting passed by for books that completely sucked. It didn't help that no one seemed to know how to pronounce the guy's name either. I mean, I'm sure there are Dutch names that people can actually say - like Jansen or Hiddink maybe. Poor planning for such a great writer, I think. How about, "The Thousand Incredible Japanese Adventures of Jacob von Hiddink?" Damn, I am terrible at this. OK, Mr. Mitchell - I withdraw my criticism.

Back to the point though - this is an amazing, moving, compelling book - just what I needed to deal with a week's worth of hospital food. Luckily, most of it had literally no taste, so I can't say it tasted bad, but probably the best thing I had was the prepackaged frosted flakes, so that gives you an idea. And if I talk about the pickle that came with my sandwich on Tuesday, I might cry. Next time I have to go in, I'm going to have to smuggle in a mini-fridge or something, because god knows neither my son nor my daughter was willing to bring me a pastrami sandwich. Jesus.
Posted by Angry Old Man at 7:43 AM 8 comments:

Being Mortal by Atul Gawande 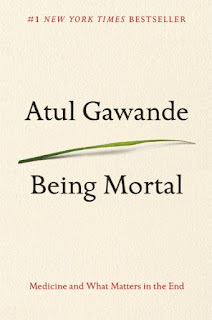 I think Kevorkian Junior is right here. It's time for all of you to stop bothering us and just let us die. I mean, let's be clear. You don't care all that much about old people really - you just want to make sure you are doing everything necessary so that when we are gone you can have a clear conscience. Wouldn't want to have those echoes of guilt in the back of your mind while you're cashing that inheritance check, right? As it happens, I am scheduled for another procedure next week - this time on my eye. So if you don't hear from me again, thanks to both of you who have been reading this blog. I'd like to say it was worth it, but I'm too old for bullshit. Anyway, I'm told that it is safe and will help me and all that shit, but there is still like a 5% chance that I will lose my sight and whatever small pleasures are still available to me. It reminds me of a Twilight Zone episode I saw a long time ago. There's this misfit who gets made fun of by everyone who just wants to read all day. And then one day he wakes up and the entire Earth is deserted. He doesn't know what to do, but then he realizes that he can do whatever he wants, so he goes to the library. He comes out with a huge stack of books and then as he's walking home, he drops his glasses and steps on them. Fucking moron. Well, it's kind of like that anyway. The point being, leave us alone! Now you understand why old people don't like going to the doctor, assholes.
Posted by Angry Old Man at 8:04 AM No comments:

When Summer Ends by Isabelle Rae 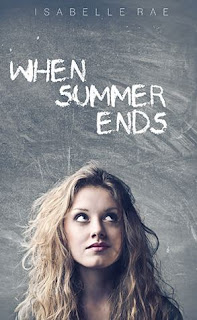 So my daughter stopped by last week with her friend Claire to drop off this book and "check up on me," whatever that is supposed to mean. She said it was a good book for this time of year, to which I explained that the magic of books is that you can imagine yourself in any time or place and that if she needed to read something that coincided with the seasons, she should read the Farmer's Almanac, which has lot of helpful information. But she is the kind of person who won't eat a tomato in the winter or an oyster in the summer or a pickle during a full moon or I don't even know what else, so what I did expect. Anyway, she just gave Claire one of those smug "See what I mean?" looks and ignored me. So I read the book right away, lest it go bad on my shelf and start to smell of rotting pop lit. There's not much to say for it, but in it's defense, it was no more banal than the conversation with Susie and Claire. "Can you believe it is almost September?" "I know, it seems impossible!" "Where does the time go?" Are you fucking kidding me? Do you own a calendar? Can you count to 31? Do you perhaps remember how this happened last year? And another thing, it you want sympathy for how life changes at the end of summer, don't look here! My tomorrow is going to be spent the same as my yesterday, sitting here reading all the crap books you keep dropping off. I should have read the Farmer's Almanac myself - maybe it would have predicted this bullshit.
Posted by Angry Old Man at 7:42 AM 2 comments: