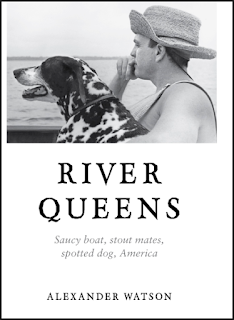 Well, here's a shocker for you. While I was just minding my own business on Twitter (oxymoron noted), a real person, who is an actual author - I shit you not - asked me to write a review of his book. Clearly he hadn't read my inane ramblings before asking, so that was one strike against him from the start. So I told him to read some of my reviews and reconsider, and after doing so, he still wanted me to write it! So there's strike two for poor judgment. I considered the possibility that this was one of my grandson's friends putting me on, but sure enough, the book arrived in the mail with no traces of airborne pathogens or explosives, and I was gearing up to pan it as creatively as possible. But unfortunately, River Queens turned out to be pretty good. The basic plot of this highly readable memoir is this: two gay gentlemen from Texas and a dog fix up a classic wooden boat (the dog has a minimal role in that part) and travel together by river to Ohio. I'll admit that it is not the most circuitous of plot lines, but hell, we can't all write Harry Potter. Still, the book has a number of things going for it. Foremost, the protagonists are endearing and admirable in many ways. They are complex and imperfect, but eminently likable. Their journey is far from easy, and you can't help rooting for them the entire way. The other best part of the book is the glimpse it gives the reader into river culture, a subculture of America that few ever get to experience. I should more appropriately say river cultures in the plural, because as Alex and Dale travel through different parts of America's waterways, their experiences are vastly different. The people they meet are striking in myriad ways, and their brief encounters have lasting effects. I also learned that most boats are either a) broken, b) recently fixed, or c) about to break, and often two or three of those things at once. It reminded me of a cruise that Eleanor and I went on one time. We were with the Millers, and it won't surprise you that I didn't really want to go on the cruise to begin with. Eleanor and Marge were always close, and I liked Donald well enough, but he always struck me as a bit of an alcoholic who liked to gamble and talk too much. Well sure enough, there was a poker room on the boat, and within the first two hours, Donnie had wagered away his week's worth of spending money, and guess who it fell to to buy him daiquiris for the majority of the Caribbean? In any case, that turned out to be the least of our problems. Somewhere between Saint Who The Hell Knows and Isla del Get Me Out Of Here, the boat broke down. Some kind of electrical fire or something, down below where they keep the drugs and indentured servants. At first, it didn't seem like a big problem, because the weather was good and the view was nice. But as the days went on, things started to get hairy. And hot. Without being able to get into port, we started to run low on food and water. For two days, it was nothing but dry cereal and pineapple juice. Carnival, my ass! Then the plumbing reached capacity. Next thing you knew, it was like Lord of the Flies meets Cocoon, with all kinds of old rich people battling for what corner of the hallway they could shit in. We had helicopter drop-offs of water and supplies, and the whole thing was on the news! And I'm pretty sure that at some point, some old geezer fell off the side of the boat, but it's possible that I'm confusing my memory with that Jonathan Franzen book. Hell, let's just go with it. A guy fell off the boat. By the time we got tugged to safety, I had resolved to never get on a boat or talk to Donnie again. And I have kept one of those two resolutions. Maybe if we had had Alexander and Dale on our cruise, the boat would have been fixed faster and we could have spared everyone all the conversations about under what circumstances cannibalism is acceptable. So the point is, read this book.
Posted by Angry Old Man at 2:34 PM