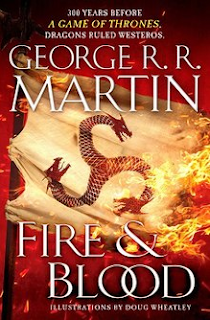 This time my daughter has gone too far. But I'll get to that. First, for you new folks, let me introduce myself. To summarize, I am just an old guy who loves books. I read everything - even the crap my son-in-law gives me in his misguided attempts to build a relationship. Jesus, Gerry - give it up. And now I write a blog called An Angry Old Man Reviews Books. It is truth in advertising. Doing this blog was not my idea, and on principle I do not typically like other people's ideas, but I have to reluctantly admit that it has brought me some enjoyment. At least with this, if no one cares what I'm saying, I can't tell in the moment. And as a retired person and a widower, I do have a bit of time on my hands. So that's the prequel on me - on to the Game of Thrones prequel and my daughter's unannounced visit.

My daughter and I have agreed on principle that since I still have four people's worth of stuff in my house, which has only one current occupant, that getting rid of some things makes sense. And I am all for letting the grandkids have old dressers and bookshelves and whatnot, but yesterday Rachel drops by on a lark and says that it is time for me to get rid of my La-Z-Boy recliner. I happened to be in said recliner at the time, finishing Fire and Blood, and was not quite ready to be yanked from the world of fantasy back to the horrid details of reality, but so be it.

Let me emphasize - this is MY chair! It was always known in our house as Dad's Chair, and then Grandpa's Chair. It was in this chair that I read to them as children. It was in this chair that I came up with the recipe for Grandpa's Secret Spicy Pickles, using fatalii peppers, mustard seeds, garlic, and a secret ingredient that I am not about to tell you here. It was in this chair that I read 90% of Fire and Blood (the other 10% was in the bathroom after my son once again chose the wrong Mexican restaurant). So I told her she could basically have anything in the house that she wants but to give it up with the chair. I wanted to tell her that she was conceived in this chair just to make her uncomfortable, but that seemed unnecessarily petty, and she probably remembers that we got it when she was about 8 anyway. But then she told me that my wife Eleanor never liked the chair anyway, and that was when I had had enough. It was Eleanor, after all, who bought me the chair. Or at least, she found the coupon that I used to purchase the chair, which is pretty much the same thing. I admit that she did at times leave furniture catalogs on the bedside table, and she occasionally commented that it didn't match anything else in the house, but it was always with a smile and a nod of understanding. It is, after all, the only piece of furniture I picked out in the entire course of our marriage. So no, I am not getting rid of this chair, no matter what Rachel has to say, and I escorted her from the house making sure she understood the situation perfectly. The book was good.
Posted by Angry Old Man at 6:54 AM