Getting By: Understanding Lifelong Depression by Jack Trelance 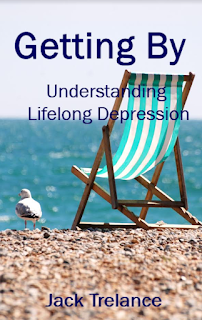 So I was sitting in my la-z-boy enjoying my ginner (that's what I call it when instead of eating dinner, I just drink gin), when I heard an unfamiliar knock at my door. I was engrossed in this well-written confessional memoir about mental health, which traces the long history of symptoms and treatment of Mr. Trelance. He does well to convey the intensity of his experience without being maudlin, and there was a lot to learn from and to relate to. Thus, I was in no mood to be interrupted, and since I recognize the knock of the few people I would willingly allow into my house, I knew it was a stranger who was about to receive my fury.

It turned out to be a young bubbly do-gooder with a hemp necklace, Birkenstocks, and a clipboard. I've got a couple standard ways of handling people like this. Option 1 is the hard of hearing route. I let them start their spiel and repeatedly say "What was that?" or "Eh?" and see how loud I can get them to talk. Then, when they are inappropriately loud, I yell, "Quit screaming at me, you hooligan!" and I shut the door. Option 2 is the lost my marbles route. I keep saying, "Tell me more!" and encourage them to go on and on about their cause and then hit them with a deadpan "Are you my grandson?" or "Where's my soup?" That usually gets them on to the next house in a hurry, and their reward is having to deal with Margaret and her schnauzer.

But for some reason this time I was off my game. The kid was selling memberships to public television, which is all well and good, and my mind was wandering between the poignant scene in the book I was reading and that time when Fred Rogers went to Congress and convinced some mustachioed doofus not to end the Corporation for Public Broadcasting. I thought back momentarily on how my kids used to watch public television all those years ago, and I offhandedly said, "Oh, thanks, but I'm already a member." "Great!" he says, "I can look that up right here." Damn it! What a rookie mistake. Far below my standards. It took him about 9 seconds to look up my address and figure out that I was not a member. But he played it smoothly. "Must have been public radio," he says, chuckling. "Must have been," I reply. But I'm rattled at that point, and I go with the next worst lie possible - "I think I donated at work." "Great!" he says, "Where do you work?" Now I know what I look like, and we both knew I was well past the age of gainful employment. Umm....I'm a greeter at the morgue? Backup cryptkeeper? Model for people learning to paint rhino skin? And it was way too late for the hard of hearing or lost my marbles ruse. This damn hippie was beating me at my own game.

I was nearly out of options, and out of pure desperation I just gave an indefinite cry of discomfort, put my hand across my stomach, mumbled "Excuse me," and backed out of the doorway, shutting and locking the door. I was embarrassed at my JV performance, but consoled myself by going back to my book and my gin. But not 5 minutes later, more pounds at the door! I was really going to read the kid the riot act this time, but when I opened the door, it was paramedics! The damn fool thought I was having a heart attack and called an ambulance! Now I was really pissed. I insisted that I was fine, but they made me go through all kinds of tests, and all the while, he was lurking in the background, still thinking he could make the sale! I told one of the beefy medics to thank him for his concern and tell him to move along, and eventually he went. After what seemed like an eternity, the main doc said "Is there anything else we can do for you, sir?" I was truly at a loss for words at that point, and the only reply I could manage was, "Where's my soup?"