Pimp My Airship by Maurice Broaddus 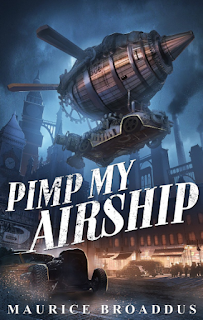 What the hell, people? Am I the last person in the goddamn universe to find out about "steampunk?" Even the most ignorant people I know are already up on this. My son-in-law told me that steampunk is "the most honest form of American literature." I mean, Jesus, Gerry, do you even hear yourself when you say shit like that? I swear to God. My grandson apparently went to Halloween last year dressed as a steampunk, and even my granddaughter stopped her conversation with a squirrel long enough to tell me that she thought I would have known about this by now. Well, thanks everyone. You're all a huge help, as always. However, due to the kindness of Lesley Connor over at Apex Publishing, I got to read this steampunk novel, and now I know that I like it! Or at least, I liked this one. Lots of action, witty one-liners, good characters, and some poignant social and political allegory. Still, I have a few questions.

Honestly, I'm not sure I understand what steampunk even is. First off, are we in the past or the future?  I mean, I can read the dates, but still. Second, there is clearly steam everywhere, but where is the punk? I asked my grandson about that, since he is the punk that I know best, and he said that if I couldn't figure it out, then I am more senile than he thought. That stung a bit, but touché, Jackson. Third, why does everyone dress like that? And fourth, if you write a novel but just change the available technology, does that count as a whole new genre? If so, I have a few ideas.

New genre number 1: futuristic space world sagas, except the only way to make fire is by rubbing sticks together. I call it Science Friction™. Now hold up a minute. I don't want to hear any shit from you people about making dad jokes. I was making dad jokes before you were born. I am incapable of shame. New genre number 2: explicit romance novels, only all technology related to sex toys is guarded by a reclusive family of bears. I call it Bearotica™. New genre number 3: Derivative novels from popular fantasy series, only they are all set in Houston in August and there is no air conditioning. I call it Fan Fiction™. I trust that none of these genre names have been taken, and I encourage all you writer types to get started. However, I have trademarked all the names, so you will all owe me big time royalties. It's not too late for me to make my millions!
Posted by Angry Old Man at 5:59 AM