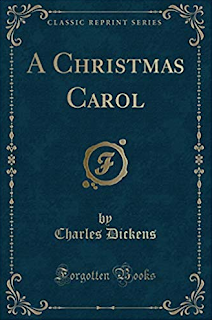 It's becoming a bit of a personal tradition to read this book around this time of year. Some people have called me cold-hearted (bastard people, mind you), but this book does strike an emotional nerve at times. I mean, just to think of poor Jacob Marley, cut down in the prime of his earning potential, and by what even? It's a mystery. After a close reading, I bet it was a prostate thing - it would explain his demeanor when he returns as a ghost. It's the silent killer that no one wants to talk about, but here's a PSA - gentlemen, get yourself checked. I do it every year, whether I need it or not.

Anyway, this year I found this edition with the original typeface, and that was a nice novelty. The font reminded me of newspapers from when I was a kid. In the city, there was no paper delivery, so you had to go out and find a newspaper boy and buy a paper from him. The kids were a pain in the ass, and a weird lot too - always haggling about the price of papers, dancing around, and singing songs about New Mexico and stuff like that. Or maybe I'm crossing my memories with something, but in any case, it was nice when I moved out here and someone would actually bring your paper to your door. Now, of course, some guy just drives by at 40 miles per hour at 5 in the morning in a car with no muffler and chucks the paper out the window and you're lucky if it even ends up on your property, but hey, efficiency!

So I told my daughter Rachel that my Christmas gift to the family this year would be to not attend the big family Christmas dinner. I thought it would be a win/win, but Rachel told me with a straight face that everyone would miss me if I wasn't there, even Cousin Jim, the nose-whistler. I mean, Jesus - what the hell is up there that prevents him from breathing normally, and wouldn't you think that it could be removed? Do you think maybe someone stuffed a harmonica up his nose when he was a kid, and it's too close to his brain to operate? I can hear him from the other room even over the sound of my son-in-law pontificating about how walking the dog in the woods (for once) gave him a newfound perspective about nature and our relationship with the Earth. Damn it, Gerry!

So I guess I have to go, but I will not go quietly. My Christmas present to myself this year is the last jar of Ghost Pickles that I canned this summer (my spiciest ever!). I've been saving it for a special occasion, and I think this is it. My plan is to eat the entire jar in the morning just before I go over there, and then just let my digestive system take care of the rest on its own. Merry Christmas, suckers! 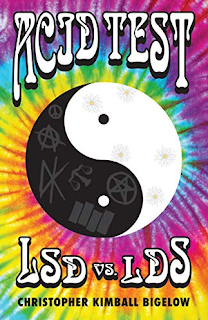 Ah, drugs. So useful for so many things. They are just right for scaring the shit out of your in-laws, making listening to Phish almost tolerable, getting into parties when you're too old to reasonably be there, creating temporary, artificial meaning in the midst of a purposeless existence, and in the case of Mr. Bigelow, facilitating one's exit from Mormonism. But just when it seems that he will be sucked forever into the underground Punk scene, there is a twist! Want to know what happens? Read the book, suckers! Meanwhile, let's talk more about drugs.

Here's one of the sad ironies about drugs. When you are young, when your brain is still not fully formed, when you have life goals still left to accomplish, kids to raise, and plenty to lose, drugs are everywhere! When I was in my twenties, I could hardly go to the post office or to an underground fight club without being offered drugs. They were everywhere! And it wasn't just the hippies either. The straighter the tie, the higher they fly! That's what people said anyway. And if I had a dollar for every schmoe I saw ruin his life with drugs, I'd have enough for a dimebag, at least.

But where would I get one? The flip side to all that is that once you have accomplished all you will in life, no matter how little that is, when you have nothing left to lose, no one to harm, no moral sensibilities left to offend, and nothing else to do anyway, the drugs are gone! I no longer get invited to parties where I can ask if anyone knows a guy, and if I went into the neighborhoods where I know people used to be selling, I would probably be dead before I was high, and that would defeat the whole purpose! What is a curious, very mature gentleman to do?

But there is some hope! Have you heard that they are starting to prescribe psilocybin to old people with "death anxiety?" They give it to people in supervised labs with whitecoat scientists guiding your LSD trips. I mean, can you think of anything more likely to kill a high than having to talk about it with a bunch of psychologists in the moment? And why are we not supposed to be anxious about dying in the first place? Off we go soon to perhaps something beautiful, and perhaps eternal damnation, and perhaps nothing at all, but hey, who gives a fuck, right? No worries, Mr. Psychologist, but if you really want me to feel better, maybe you could give me some privacy while I get my "treatment." And by the way - Jackson, if you are reading this, don't show your mother. It's embarrassing to have your own daughter give you "the talk" about drugs.
Posted by Angry Old Man at 6:47 AM No comments: 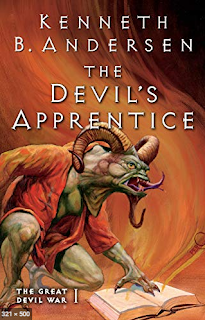 My relationship with my father-in-law was not like this. The first time Eleanor brought me home to meet her dad, I challenged him to Indian leg-wrestling. He kicked my ass seven times in a row, but he knew from that point forward that I wasn't afraid of him. And that was important later when I did things he didn't like, which was most of the time. But Gerry is so weak. You should have seen him when he came to ask for some help with a down payment for their house. We had already told Rachel we would give them the money, but when I gave him the line about how money was tighter than I thought these days, I thought he was literally going to cry. Pathetic. I still refer to it as "my house" sometimes just to watch him cringe. So I recommend this book to everyone, but especially to Gerry, who I think will learn some useful life lessons.
Posted by Angry Old Man at 9:23 AM 3 comments: