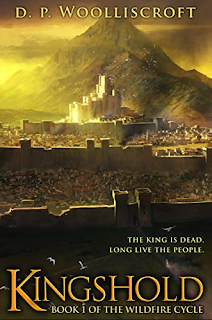 Guess what people - I grew a beard! Just goes to show that you are never too old to try something new. And what a beard it is! Noble, elegant, distinguished. It is a beard to put all other beards to shame. Think Harrison Ford. Or Sean Connery. Or maybe Harrison Ford playing the lead role in a biopic about Sean Connery. For a dissenting opinion, you can talk to my daughter Rachel, who told me I look like the Unabomber. But what the hell does she know? I bet she never grew a beard or met the Unabomber, so she can shut the hell up.

I am at least partially indebted to this book for this glorious, regal beard. This is the kind of adventure story in which everyone should have a beard - character or reader. In fact, the more the action grew, the more I imagined that everyone had a beard! Bards, wizards, servants, male or female, old or young - beards for all! In my opinion, it made the book even more exciting. I also appreciated the idea of replacing a monarchy with a democracy, especially since around here, we seem to be currently experimenting with the opposite. But dictatorships aren't all bad, I suppose. When I succeed King Trump, I will decree that all American shall don beards! And pickles will be named our national food! And our national drink will be gin in a coffee cup with the words "World's Best Grampa" misspelled on it. I am already ahead of the curve.

To be fair, this book is not the only reason I decided to grow a beard. Beyond the fact that I have scant purpose in life and literally no need to look respectable any more, it's fucking cold outside! Don't get me wrong - I try not to leave my house intentionally, but sometimes you have no choice but to go get the mail or yell at a teenager on a skateboard. My neighbor Margaret has her little schnauzer dressed up in a sweater that matches her overcoat again, which is a sign of two things. First, it is too cold to walk your dog. Second, my neighbor is an idiot.

The elephant in the room here is that my face is becoming virtually unshaveable. I have been diligent about this for a long time, but the writing is on the wall. The wrinkles in my face are starting to resemble the Mariana Trench. I may have to actually iron my face before shaving it from now on. The hairs themselves are thick enough to be used as toothpicks, and last week I used my cheek to smooth a wooden banister when I ran out of sandpaper. It's pretty much like trying to shave an elephant's balls at this point, which I can tell you is nearly impossible. But that, friends, is a story for another day.
Posted by Angry Old Man at 7:27 PM