Rise of Gaia by Kristin Ward 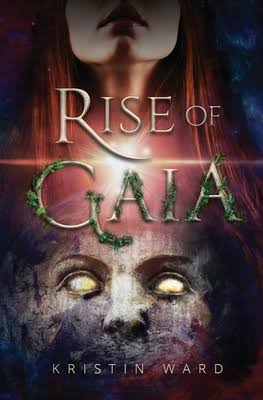 Well, it appears that I am not qualified to be a sheep herder. I was actually able to talk to a guy who runs a ranch in Wyoming, and I explained my predicament. He agreed that my neighbors sound like a bunch of assholes, and when I asked about his, he told me that due to his location, he has no neighbors. Could it be Heaven on Earth? I begged him to let me come, but he said that I wasn't qualified, not only due to my age (I think he smelled a discrimination lawsuit), but also due to my "lack of necessary skills, knowledge, and relevant experience." Well, damn. I told him that if you basically just sit on a horse all day, I am already a champion sitter here in my La-z-boy, and he told me that if I came out there and tried to do that job, "the land would destroy me." Funny, I told him, I just read a book about that.

It was a good book too! I was grateful to be included in this blog tour, as I don't think I would have found this one otherwise. But the theme was timely, the characters were compelling, and the plot moved quickly. I always like seeing bad people (read: most people) get their comeuppance, so I settled in for some nice schadenfreude as the Earth punished everyone. And I was reminded of battles with nature from my own past.

When Eleanor and I moved into this house, there was a big old stump in the backyard. Eleanor wanted to put it in the contract that the previous owner would have to remove it, but things got a little tense when I commented on the recent abysmal paint job and the cracks in the ceiling they had tried to plaster over, so we were worried that anything more might jeopardize the sale. I assured her that I could take care of it, and she gave me the look. And God bless her, she was right, as usual.

I started with my saw, figuring I could get the majority that way, as well as some roots. I have to admit that I didn't fully understand the depth, length, or width of the roots, and after losing three teeth (two on the saw, one of mine when I pulled too hard trying to get it unstuck from a particularly large root), I was pissed. So I got out my ax, and I went to town. After about an hour, I had made virtually no progress, but I felt better. It's always good for your mind to swing an ax at something, I think. Anyway, I thought I might be able to wrap a chain around it and pull it out with my car, but then I realized that I had axed away anything I might be able to chain it to. It was about that moment that I saw my new neighbor Margaret peering through her windows and laughing at me. Thirty-four years later, I have not forgiven her.

The next day, a friend stopped by with a housewarming gift, and he told me that he had removed a stump in his yard with dynamite and that he had a couple extra sticks leftover. Something primal and  manly deep inside me was triggered, and I knew that this was the solution. What I did not know was that dynamite sticks are directional, and it actually matters what way they are facing when you blow something up. I ended up with a crater big enough to be designated as a lake in Minnesota, and the entirety of the former contents were splattered all over my newly (abysmally) painted house. HOWEVER, the stump was gone, and I painted the house an appropriate color. So, in the end, Seymour 1, Earth 0. Take that, Gaia!