The End by MLT 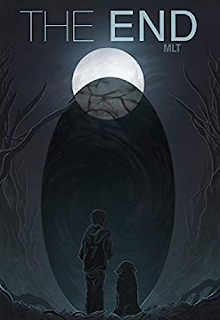 Hold on to your seats, suckers! This book is an action-packed thriller, as a bunch of misfit heroes, laden with all kinds of emotional baggage, try to save the world from a bunch of vampires, multi-headed hydras, dragons, giant metal monsters that are beyond my gin-addled brain's ability to properly understand, and a plethora of multi-colored hellhounds. No small task as you might imagine. But what really gets in the way, beyond the myriad creatures from the abyss, is their lack of a sense of community. If they had just been able to get along better, I'm sure they could have closed the portals and confined these otherworldly beasts to other worlds. But that's just typical for society these days, isn't it? Let me share an example.

Now that I have become fluent with "electronic mail," my grandson put me on some kind of list where I get a bunch of stupid messages from everyone in my neighborhood. And you would not believe the crap people write. When I moved here, the neighbors all spoke to one another with their actual mouths. You would see everyone at school or neighborhood events, and you might spend a moment or two thinking before actually speaking. Conversely, I guess thinking before sending an email is not a thing.

The first message that came through was from someone claiming to be putting a fully functioning, never used ice cream maker on the curb for anyone to take. This was obviously a lie. I mean, who would do that? First of all, get off your ass and make some damn ice cream! Is it too much work for you? I hope you realize that that machine was explicitly made for lazy fuckers who can't be bothered to make ice cream the real way. And even that was too much to ask? Pathetic. Second, if you really had one that worked, wouldn't you give it to a friend instead of putting it on the street? Too lazy put dial the phone too, or just no friends? My thought on this ice cream maker was that it was broken at best, and a trap at worst. Sadistic child poisoners or something like that. I lumbered up there just to save the kids but it was gone before I arrived. I'll be scanning the obits even more closely than usual this week.

Then a message came through from someone "concerned about safety in the community." According to this armchair vigilante, someone was peeking over his fence to scope out the premises, then knocked on his door in broad daylight to see if anyone was home. He then left, but we should all be on the lookout! An hour later came a response that read, "That was me. I am your neighbor and have lived next to you for 10 years. I got some firewood, saw that your pile was low, and came to offer you some." And that pretty much sums it up, folks. We don't need vampires to destroy our communities - we are doing it ourselves! Any chance that portal is still open? I might prefer to take my chances on the other side.
Posted by Angry Old Man at 6:04 AM