May Day by Josie Jaffrey 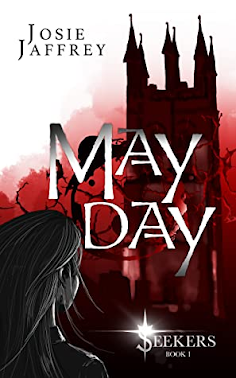 OK, so a couple things about pumpkin beer. First off, what the fuck? Whose stupid idea was this in the first place? Now don't get me wrong - I am all for culinary experimentation under the right circumstances. When I first introduced my Grampa's Extra Spicy™pickles made with fatalii peppers and a secret ingredient that there is no way in hell I'm going to tell you, lots of people said, what the fuck? But was more of a what the fuck, what mad genius came up with this incredible addition to our pickle panoply, and how is it possible that Vlasic has declined his offer to serve as a consultant, not once, not twice, but on three separate occasions? It would be like a publisher passing on this novel three times - inconceivable! Truly, is that company run by monkeys with pocket protectors or something? But back to the issue at hand, some guy was thinking about what might make his beer taste better, and he thought, I know! Let's throw in this gourd that people literally only grow to scare people or to obliterate with baseball bats. Stupider than the goddamn monkeys.

Also, let's do a little math, folks. Start with the date that you first see pumpkin beer on the shelves. If you're living in blissful ignorance, that was a few weeks ago. Go back another week for bottling and shipping. Then recognize the fact that on that date, there was not one fucking ripe pumpkin in all of North America. So I don't know what is going in that beer to make it taste like pumpkin, but I know what it isn't, and that's pumpkin. Just think about that for a minute.

I should acknowledge that typically, I don't drink beer at all. Not that I don't like it, but I prefer to drink out of the coffee mug that my granddaughter gave me for Christmas a few years back with a picture of her family. It has a big crack about halfway up from where I tried to chip my son-in-law's face off of it (mostly successfully), so now I can only fill it about halfway. And four ounces of beer never did anyone any good, which is why I pretty much stick to gin. At least in the morning.

But with all that said, I am not a someone to look a gift horse in the mouth, so when my son brought some pumpkin beer to share "in the spirit of the season," I did allow him to come in. After a single sip, I thought for sure that he had come to poison me like I always knew he would, but before I could even exclaim "You're out of the will this time for real!,"  he tasted it and assured me that the flavor was - I shit you not - exactly what they were going for. I swear to god, you would be better off making pickle beer with all the Vlasic pickles that should be taken off the market in the first place. Probably more lucrative too. Are you taking notes, monkeys!?!?