The Becket List: An A to Z of First World Problems by Henry Becket 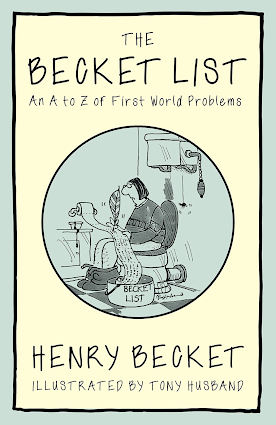 Finally, someone who really gets me. A person who sees the world for exactly what it is: one steaming pile of dog crap after another. And I meant that as a metaphor, although living next to Margaret and her goddamn yippy schnauzer for all these years makes that sentence more apropos to my life than it should be. Come on Margaret, have you ever heard of a goddamn fence? But I digress. In compiling this exhaustive list of things to be angry about, Becket has not only justified my world view, but established himself as a connoisseur of complaints, a potentate of protestations, a baron of beefs, a true kindred spirit of kvetching. At least, that was my initial thought.

Now let me tell you - there are a lot of things to be pissed off about in this book. And the more I read, the more a thin stream of self-doubt began to creep in around my steely, angry veneer. I mean, there were things in this book I had never even thought to be mad about before. How did I miss those? And there were things in this book I'm not sure are even things. Anaglypta? Are you fucking with me, Becket? As the list went on and on (and on), I started to wonder about my own place in the world. Am I just a JV angry person, ranting above my station? Or worse, has this guy made me obsolete? I know I am old enough to be the Angry Old Man, but am I angry enough? "This is some fucking bullshit!," I yelled out loud, but it sounded like I was just trying to convince myself.

Then I started reading some things that sounded eerily familiar. It seemed that at times, Mr. Becket and I were on parallel soap boxes, driven to fury by the same things: the snowflake generation, bad sequels, and airport security, just to name a few. At first, I thought it was a coincidence, but then it was like a dim light started to emerge in a dark room, and the only things in the room were a pick-axe, a rope, a large puddle of water, and - oh, fuck it, I'll fix this metaphor later. The point is, HE STOLE MY ANGER! I'll tell you what I did not find in the "I" section of things he dislikes - intellectual property theft!

Like a flash (over the course of a minute or so), I sprang (lumbered) up from my La-z-boy and began to furiously pace (hobble) around the room. I considered my options: could $237 in savings and whatever is in my jar of nickels buy me a proper lawyer, or perhaps an improper underworld mercenary? Doubtful. Should I challenge Mr. Becket to a duel? Or perhaps send him a mean tweet? But in the end, I realized that none of it was necessary, because the flames of righteous anger had been stoked anew within me, and I was consumed with joyous rage. I am not obsolete, I am the Angry Old Man! So watch out snowflakes, Grandpa is back!