All The Light We Cannot See by Anthony Doerr 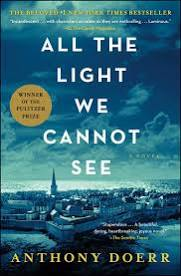 There are few things to compare with that feeling when you find something of great value that you believed was lost. In this novel, it was a rare and wonderful diamond, and for me, it was a purple woolen sock. You see, when I was doing the laundry yesterday, there appeared a sock I had not seen in months, one whose partner has lived in my single sock box since the beginning of the Covid Era. The near tragedy of the story (similarly poignant to the tragedy in the novel) was that last week my son Lawrence - I shit you not - tried to make me throw the whole box out! This from someone who is lucky when he puts on matching shoes, let alone socks. His girlfriend (god bless her) recently told me that he got lost on the way to deliver a lecture, which might be understandable except that he was teaching by Zoom from his own living room!

When I was a kid, our Uncle Morrie would always bring us socks as gifts. Boy, did we hate that fucker! He'd come in with his too long and overly bristly mustache, kiss us hard enough to leave chafe marks for a week, and give us "presents" for which we were forced to express our gratitude. Science has proven, of course, that there is an inverse relationship between age and appreciation of socks, so in part, he just didn't understand his audience. But now that I have reached the top end of that scale, does anyone give me socks? No, they do not. And just so you don't think he was some kind of saintly altruist, Uncle Morrie worked in a sock factory, so he probably stole them all anyway.

The real question, of course, is where the hell this sock has been for the last year. For it to show up my laundry suggests that it was either in the washer or dryer all this time (implausible), somewhere in my folding area where I didn't see it (unlikely), or stuck to some other article of clothing that I wore without realizing it (embarrassing). I don't buy fabric softener, of course, because I am not an idiot, so there is a real possibility that due to static cling, I wore that sock on the back of a shirt some time recently. At least I don't go anywhere or see anyone, so no one would have noticed.

Margaret has a more sinister explanation, which is that someone is fucking with me. This is the most obvious explanation, and usually the simplest solution is the right one. I have 37 other socks in my box waiting for their partners right now, and it is beyond logic to think that many socks could disappear by accident. My grandson suggested that they could have been stolen by rodents living in my walls, the sheer stupidity of which makes him my prime suspect. I could try to fenagle an invitation to dinner so I could snoop around his room, but that would mean having to share a meal with those people. So I'm a bit stuck for now, but at least my feet are warm!