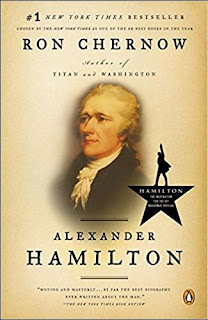 Any fool knows that you never go see a movie without reading the book first. That is just common sense and respect, right? Jesus. So when my son walks in on my birthday wielding a couple of tickets to Hamilton like they were a magic hammer that would undo everything that has happened, I naturally ask him if he bothered to read the book. He says that it is not a movie, it is a musical, as if that should make everything ok, and says that I will love it because I like history. Do I like rap music, I ask? Which he takes as sarcasm, but truly, I am wondering if I maybe do like rap music. I mean, I don't listen to rap music, and it's probably terrible, but it is still an open question. But not to my son, who tells me that it wouldn't kill me to get out of here once in a while and then promptly takes his own advice, taking the tickets with him, I might add. So I did the only reasonable thing, which was to read the book, which was, in fact, enlightening. I don't know how you would turn it into a musical, or why in god's name you would want to do such a thing, but I recommend the book for anyone who wants to understand American history better. And for anyone who thinks things are terrible now, because it was a nice reminder that our politicians have been doing the same stupid shit since the country started.
Posted by Angry Old Man at 7:32 AM