Future Home of the Living God by Louise Erdrich 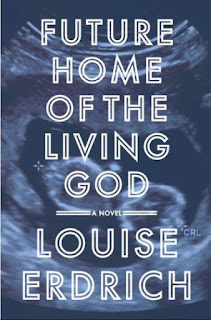 This dystopian novel has an interesting premise involving evolution and child-bearing, which is gradually revealed by the author in a way that would be quite suspenseful if the entire thing wasn't given away by, I shit you not, the VERY FIRST SENTENCE of the dust jacket plot summary! I mean, how many morons did it take for this to happen? First, you've got your intern, and English major fresh from Amherst College, who is amazed by the very idea because she's heard of Children of Men and can't wait to write her first dust jacket. This goes up the chain to the editor, who reads it over with depressed, glazed over eyes, while he repeatedly tells himself that he, too, could have been the novelist, but he gave up the dream for his family and the security of a steady paycheck. Then there's the marketing guy, who is probably the smartest but most nefarious of the lot, who is worried about the esoteric title of the book and figures he needs something to hook people in when they open the cover, spoiler be damned. I'll tell you who was not consulted, and that is the author, who must have been pissed when she found out how the confederacy of dunces had undermined her book with their summary. Jesus.
Posted by Angry Old Man at 6:44 AM