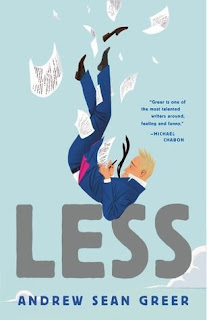 I think I may have to give up coffee. I have noticed that after I drink coffee, I usually feel more anxious and stressed out. It is possible that this is related to the people I typically drink coffee with, but I think there is a direct effect of the coffee on top of that. And it makes me sweat. And I'm sure that somewhere along the line from the coffee trees to my cup, lots of people were likely oppressed, so it's probably just the safest thing to do. You would think that my daughter, who won't so much as eat a cashew unless it is fair trade, organic, and was able to live out it's natural cashew life in a cage-free, open air environment, would be able to get behind that. And I was trying to explain to her yesterday morning when we met to talk about this book, which, I should add, was lovely. I mean, they don't just give out Pulitzers for nothing, right? In any case, my daughter refused to really consider what I was saying and thought that I was, and I shit you not, being difficult. She told me that it was too early for me to have the vodka gimlet I ordered, notwithstanding who may have been oppressed where. I told her that I was perfectly capable of making my own beverage choices and that if the worst did occur, meaning that my afternoon plans of pruning the hedges were postponed, I would summon the courage to go on living anyway. She was not amused. But you know what, when I finished my gimlet, I felt neither sweaty nor anxious. Great book.
Posted by Angry Old Man at 11:24 AM