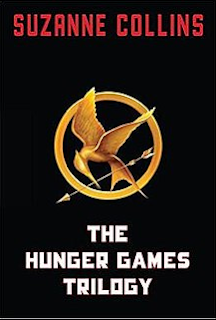 Let me tell you a couple things about pickles. First of all, you do not need alum to make them crunchy. Do not under any circumstances follow the lead of my daughter's friend Claire, who uses - I shit you not - something called Picklecrisp, which is an abomination. I mean, what the fuck is even in that stuff? In any case, you should soak the pickles in ice water overnight before canning them, and you need to snip off the blossom ends so enzymes don't soften your pickles. And don't overprocess them, for the love of God. I promise you the lids will snap if you just give the a little time. It's not that complicated if you have half a brain and a few minutes of forethought. Which is to say that you need to know from the beginning where you want to end up. Which unfortunately was clearly not the case in this trilogy. I almost hate to admit it, but the first book was pretty good. I only hate to admit because my daughter told me as much and I had assumed she was wrong because of all the hype around it. So fair play to her, but I got the last laugh because the trilogy descended into mindless garbage sadly trying to capitalize on the initial success and buzz. I can only assume that it was never meant to be a trilogy in the first place, because after the first book, nothing makes anything close to a damn bit of sense. Might as well have dumped the whole damn thing in Picklecrisp.
Posted by Angry Old Man at 1:44 PM