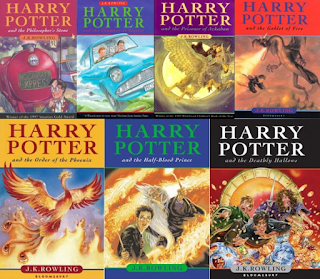 I hardly even know where to begin to describe the incredible recent series of events. I should start by saying that I had absolutely no interest in reading Harry Potter, for obvious reasons. But my granddaughter Tina, to whom I have a hard time saying no (despite her manners), came over with her complete set and insisted, tearfully (I may have made a pejorative comment about the fantasy genre as a whole), that I read one. So to make her happy, and because I felt a little guilty, I started the first one - not because I planned to read them in order, mind you, but just because it was the smallest. But then the strangest thing happened - the book was good! Really good. I read the whole thing in my La-z-Boy in one sitting, and I went right on to the next one. And that one was good too! I became immersed. I read at a frenetic pace and lost track of time. I felt...happy!

However, about halfway through The Prisoner of Azkaban, I had a realization. It suddenly dawned on me that everything I had read as a child was complete and utter crap. All of it. All my favorites, so hollow and thin and simple. I was angry again. I lumbered up to the attic, found a dusty box full of books from my youth, and dumped the entire thing in the recycling bin. Maybe they'll make more Harry Potters out of them, I thought! I made a brief stop in the kitchen for a deviled egg, then went right back to reading. I read until I fell asleep. As it turns out, it was only 4:00 in the afternoon, but after a brief nap, I finished The Goblet of Fire before bed. I slept better than I have slept in years. I woke up refreshed and determined. I poured a large black coffee with only half my customary whiskey in it, and I sat down to read. It was incredible! What amazing combinations of humor, wonder, and drama. What deftness in dealing with death, dating, and destiny. What years of my youth wasted reading Doctor Doolittle and Mister Popper's Penguins! But there was no time to worry about that now. I read like the wind, like a man possessed, like I had nothing else in the world to do (in truth, I had nothing else to do). I read all day, skipped lunch, pissed in a bottle so I wouldn't have to get up (just kidding, but I thought about it), and turned the final pages of the Deathly Hallows in the early evening. You would think I was exhausted, but no! I felt exhilarated, inspired - all was well!

I decided that it was time for me to go out for a walk and admire the sunset. I was thinking that I should be more appreciative of the world and enjoy the sights and sounds of nature. But when I got out there, all I could hear was my neighbor Margaret's little schnauzer yipping away like crazy. God damn that dog! Oh, the many times I have imagined slipping some Xanax into a burger and chucking it over her fence. It would be completely justifiable. That little cur was ruining my bibliographic ecstasy, and I was not going to have it. I started walking over there, but in my agitated state, I missed the patch of ice on the sidewalk (Margaret - do you see a law suit coming?) and next thing I knew, I went ass over tea kettle and landed right on my back. It knocked the wind out of me to be sure, and I needed a few moments to catch my breath. After I did, though, came another realization. I could not move. My poor old body was rattled and just didn't have the strength. And it was cold. How stupid was I? What had gotten into me? A couple of minutes on the sidewalk were enough to realize that I had no hat, no gloves, and the sun was dipping. Is this to be my undignified end, I wondered? Will I not get to sue Margaret for negligent sidewalk care after all? What a terrible shame that would be! And if she notices and comes out to help, will being in her debt be better or worse than dying on the sidewalk? It was difficult to figure out. Luckily for me, the mail was miraculously late, and Red, my longtime mail carrier, found me on the ground and obtained help. I explained that I was just trying to get a different angle to see the sunset, but he called an ambulance anyway. And so here I am, writing this on my grandson's laptop in a recovery room at the University Hospital. Nothing broken, I am told, just some bruised ribs and a harsh reminder about reality. I should be able to get a lot of reading done in here, although after Harry Potter, why bother? I would consider reading the series over again, but it is clearly too dangerous.
Posted by Angry Old Man at 6:29 AM