On The Come Up by Angie Thomas 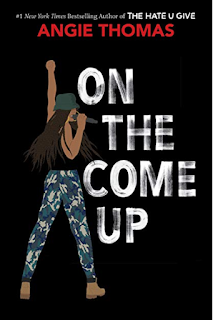 Well, Valentine's Day came and went again. I guess it won't surprise you to learn that I was never really a fan of Valentine's Day to begin with. That's not because I wasn't romantic - Eleanor and I were always good about showing each other our feelings. But that's none of your business! Valentine's Day always just felt commercialized, and then you were supposed to have valentines for your teachers and all your kids' friends and your mailman and your dentist and your neighbor's stupid yippy schnauzer, and I just got sick of it. So these days I just pretty much ignore it and maybe buy myself a pickle-shaped cupcake or something. But this year my granddaughter Tina (god bless that child) invited me to go on a coffee book date with her. And she even picked a book for us to read! Oh, how I love that girl. Have I mentioned that she can talk to animals? She told me the other day that she had a 15 minute conversation with a squirrel. I didn't have the heart to ask what the squirrel told her, and I imagine it was pretty much a one-way conversation. When she gets on a roll, it can be hard to stop her, especially if she starts talking about her dreams. "You were there, grandpa, only you weren't you, you know? You were like you but a different you and so when you started talking it wasn't your voice but I still knew it was you, right? So you were saying you stuff, but not really like you say it. Understand?" I swear there was one time she was telling me about a dream in which she had to repeatedly take a math test and I fell asleep in my la-z-boy and when I woke up, she was still talking about fractions and didn't seem to notice I had taken a nap. But bless her heart, I can not say no to her, so I read the book and didn't even complain when she wanted to go to Starbucks. Which is not to ignore the fact that that infernal chain drove all my favorite coffee shops out of business and now that idiot CEO is on the news all the time thinking he can be president because he is rich (I wonder where he got that idea). I'm not sure I had ever actually set foot inside a Starbucks before, and it looked kind of nice until I started talking to the clerk (if you ask me to say 'barista', I will stab you with my swizzle stick). I asked for a small coffee, and he asked if I meant a 'tall' coffee. I assured him that I did not, just a small coffee. He said that a small coffee is a tall coffee, and laughed as if that made perfect sense. I told him that was the stupidest damn thing I ever heard and asked him if small was tall, what the hell was a large coffee? Tina suggested to him that he didn't want to start with me, but I hushed her, and he said that medium was 'grande' and large was 'venti'. I asked if he spoke Spanish, and he said no, so I explained that grande actually means large, and I apologized for saying that his previous statement was the stupidest thing I had ever heard because he had just surpassed himself. He was getting flustered at this point, so I decided to have mercy and just pointed to a bagel. He says - and I shit you not - "do you mean the 'chonga' bagel?" At that point, I had no choice. I really let him have it, and I may have mentioned how Cuppa Joe went under and something about Howard Schultz being an entitled piece of shit. Tina told him that I have dementia (which I do not) and ushered me to one of those purple chairs, which are really quite comfortable, I have to admit. But screw their purple chairs! I will never set foot in a Starbucks again. I think Tina was a little bit embarrassed, but I think she was proud of me too. And in the end, we really did have a great time. There are some things that can be hard for an old white guy to talk about with his granddaughter, and race issues in America is on that list. But this book helped make that conversation possible, and while we didn't necessarily solve anything, it felt good to dig into something meaningful with her. So I am grateful to Angie Thomas for that. On the down side, Tina now wants to become a rapper. Those poor fucking squirrels.
Posted by Angry Old Man at 8:29 AM