The Lost Man by Jane Harper 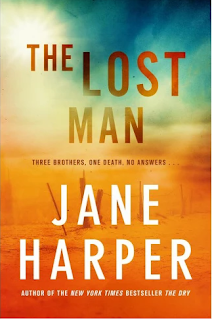 My son, the so-called genius professor, stopped by this weekend and had that gleam in his eye that could only mean I was about to have a conversation I didn't want to have. He casually mentioned that he had been on a date Saturday night, and despite my better judgement, I decided to ask him about it. I mostly wanted to make sure it wasn't with one of his grad students or any of those dewy-eyed coeds who fawn over his inane lectures. But no, it was an actual adult, some kind of civil rights lawyer as it turns out. OK, one point for him. "Where did you take her," I asked, and he told me that he took her - I shit you not - axe throwing. At first I thought I had misheard him, that he was clearing his throat or had lapsed into German or something. But no, he brought this woman to an actual bar where they will serve you alcohol and then give you actual axes that you can throw at the wall. I told him that that was not something people did in any civilized country. Although, I have to admit, that after reading this beautifully dark and suspenseful novel by Jane Harper, it does seem like something they might possibly do in Australia.

But what could go wrong? Why not liquor up a bunch of strangers and then provide them with weapons they have never used before and encourage them to throw them around the bar? You can even save some money by not having to hire security! After all, all it takes to stop a bad guy with an axe is a good guy with an axe who really wants to impress his date and has had one too many floral, west coast IPAs and is feeling a little intimidated and self-conscious because his date does actual things to help people instead of just writing books about how the invention of the cotton gin influenced the civil war or other historical anachronisms that nobody cares about.

He seemed to think it was no big deal at all. "It's just like a Renaissance Faire," he said. First off, if you are using the sentence "It's just like a Renaissance Faire" to justify any aspect of your behavior, you are in serious trouble. Second, what does axe throwing have to do with the Renaissance? I do not recall that being a standard battle technique. Best not to throw away your weapons in hand-to-hand combat, methinks. Or perhaps that was how they used to cut down trees until they realized that if you just held onto the axe, the whole thing went a lot quicker. In the end, he left in a huff, as he always does, completely ignoring me as I called out suggestions about where he could take her on their second date. "How about a meat-packing plant," I yelled. "Or maybe a tannery! Or a morgue!"
Posted by Angry Old Man at 6:03 AM