Where the Crawdads Sing by Delia Owens 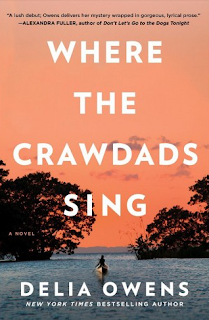 Animal abuse alert! And no, it is not the crawdads. It appears that my neighbor Margaret is dressing her schnauzer in clothes again. I have mixed feelings about this - both anger and fury. First, let me be clear - I do not like that dog. It yips, it snarls at me when I get my mail, it stares at my house for no reason, and it is ugly (yes, a bit of the pot calling the kettle black here, but being cute is part of the point of a dog, not of me (admittedly not entirely sure about the point of me at this juncture, but that is for another post altogether (now wondering if it is acceptable to use multiple parentheses in a sentence like this, as if it were math))). In any case, that dog has created significant hardship. Perhaps not as much hardship as is suffered by Kya, the Marsh Girl and protagonist of this novel, but pretty close. And if she had had to deal with a dog like this, she probably would have left the marsh much sooner and had a more normal and fulfilling existence and not gotten wrapped up in the whole murder thing. But that is less important than the current pet abuse I am observing. There is no question that that dog is miserable. And who wouldn't be? There is no human or animal that could possibly maintain an ounce of self-esteem wearing that outfit. It is the kind of Elvis meets Santa Claus ensemble that could only be worn by a being with no agency. Surely there is a 1-800 number or something for people to call when they witness this kind of animal maltreatment. Still, I have to admit that there is part of me that experiences a little bit of schadenfreude watching that little mutt have to prance around in a frilly sweater - perhaps it is nothing more than it deserves. But the smug look on Margaret's face is too much to take. She clearly thinks that she is both doing the dog a favor and impressing everyone with her haute canine couture. Well, not this guy! I know inanity when I see it, and I just saw it walk by with a fake rhinestone collar. For those of you unfamiliar with dogs, they have fur! They survived for millions of years without being domesticated, fed organic goat liver, and dressed up like Christmas ornaments. They do not need clothes. And they certainly do not need to be paraded back and forth in front of my house in a taunting manner by a neighbor who is clearly coaxing that dog to do its business on my lawn. And she'll probably clean it up afterward, but she'll smile at my window when she does, because she knows the traces remain. It makes me wonder how much it would cost to get a pet coyote.
Posted by Angry Old Man at 5:50 AM