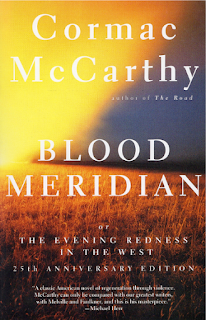 There is a serious war on, people. And I am not talking about the Americans, the Mexicans, and the Apaches who take turns slaughtering each other in this historical novel - I am talking about me and my grandson, Jackson. It seems that Jackson was feeling salty (this is my granddaughter Tina's word, and I will trust her that the usage is correct, as I truly have no idea what it means to feel 'salty') that his Fortnite youtube channel has fewer hits than my book blog, so he tricked me into reading this book. He knows that I love Cormac McCarthy (see here), and he knows that I love giving his uncle (my son, the wayward genius) a hard time about seeing movies without reading the books first (see here). So he comes to me with a story about how this book is getting made into a movie and how it's McCarthy's best and whatnot, so I dive right in. And things started out pretty great. After about 50 pages I had virtually doubled my vocabulary and was waxing rapturous about his prose. If I could write just one McCarthyist sentence in my life, it would make up for all the times I said 'I shit you not' because I couldn't think of any better way to convey emphasis.

But Jackson also knows that I can't stand reading scenes of gory violence. And the more I read this book, the grizzlier it got. I should have been expecting it, but it blindsided me. It was like going to see Mary Poppins, but you accidentally go in the wrong theater and watch Requiem for a Dream. I understand now why the movie has been ten years in the making - they must have run out of fake blood! It was so intense that I found myself thinking things like, "Well, they killed them with clubs instead of axes this time, so that's not so bad," and "At least they were dead before they scalped them - that was humane." These are not things I want to think, and no amount of exquisitely crafted prose could remove those images from mind as I was trying to sleep. It was then that I realized that I had been, as they say, punked.

So I did the only thing I could do - and just what any character in this book would have done - I got revenge. I went over to Rachel's house around 9:00 on Saturday morning, and as expected, Jackson was a long way from waking up for the day, so I had plenty of time. While she made coffee, I excused myself to the bathroom. Once in there, I unwrapped a bullion cube (beef, to really make my point), unscrewed the shower head, put the cube inside the shower head, and then reattached it. Then I enjoyed a leisurely cup of coffee with my daughter, who remarked on what a good mood I seemed to be in. Around 10:30 or so, we hear something stirring upstairs, and eventually, the shower turns on. It couldn't have been more than 15 seconds later that Jackson started screaming for his mother. But here's the genius of the plan - by the time she got up there to hear his panicked ranting about soup coming out the shower, all the evidence had dissolved - literally - and the shower was functioning normally. I expressed my sympathy and concern, and then somewhat loudly suggested that Rachel inspect his room to make sure there weren't any hallucinatory drugs of any kind. He didn't know what to think. One point for Grandpa!
Posted by Angry Old Man at 6:44 PM