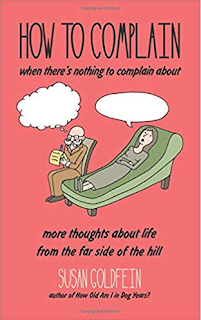 If someone is giving you something for free, it's a safe bed that it is a pile of crap. If you don't believe me, check out the next morale-boosting free chili cook-off at your office. Under no circumstances should there be chick peas in chili, Janet! For the love of God. But despite the fact that this book arrived thanks to the kindness and generosity of the folks over at Citrine Publishing, there was actually a lot of funny stuff in it. Not pie in the face funny, or Sedaris cringey-funny, but more situational comedy. Like, say, your grandson says you should write a blog, and he'll even help you set it up, but you can tell by the way he says it that he thinks you are either too old, too stupid, or too boring to actually do it. But you do it anyway, and it's kind of fun, and one day you ask him if he can help you figure out if anyone is actually reading it, and it turns out that you have more views than his youtube channel where, I shit you not, people actually watch him play Fortnite, and you watch his face sink as he has this realization that his grandfather is cooler than him, and you think, Ha ha ha ha ha Jackson, take that, sucker! That is a hypothetical example, of course, but you catch my drift.

Anyway, like everyone, sometimes when I am reading, something really speaks to me, but at times when I read this book, it seemed like it was speaking as me! I mean, this lady nails it on the head with what it's like to get old. That bit about losing your fingerprints - hell yes, Susan! The struggle is real, people. My daughter got me an iPhone for my birthday last year, and when I tried to open it with my finger, Siri started talking to me in Klingon. And the section on "getting in touch with your inner hostile person" should be required reading. It was so uncanny that I was forced to make the following pro/con list:

Evidence that suggests that Susan Goldfein is my long lost soulmate and that we should meet for a blind date at a Sandals resort somewhere in the Caribbean: We are both people of a certain age who love to write, have a good eye for finding things to complain about, no longer have fingerprints, and even have similar names! (Mine is a secret, though, because Jackson tells me if I put my real name on the internet, I will be abducted by Russian sex traffickers)

Evidence against: She seems to be married, lives in Florida, and appears by all available evidence to be a normal person.

So I guess the noes have it. Which is typical. Whenever I get a brilliant idea or make a novel suggestion, 'no' is always the answer I get. Hey family, want to skip Thanksgiving dinner and go out for pastrami sandwiches? No. Hey grandkids, want to come over and massage my bunions? No. Hey everyone else in this restaurant, can we all agree that the meatloaf tastes like cardboard? No answer. You know, finding things to complain about feels like it's getting easier every day. Maybe I should write a book too.
Posted by Angry Old Man at 11:50 AM