The Song of Kieu by Nguyen Du 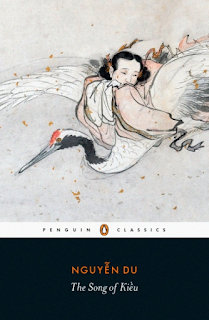 I must start by expressing the gratitude I felt to Sarah Wright and Penguin Classics for sending me this new edition of the Vietnamese epic poem, "The Song of Kieu," with lovely translation and introduction by Timothy Allen. This is a new area of literature for me, and I was grateful for the historical context Mr. Allen provided. I found the text to be remarkably readable and lyrical, and I finished it with satisfaction. It stuck with me in the following days, and I was intrigued to learn more about the author and the translator, and that was when I realized what a Trojan horse this gift really was.

First, some context. When I was courting Eleanor, I had a rival. He was (in my biased opinion) a short, weaselly fellow, but oh, how her parents loved him. He came from an established family that owned a successful glove-making company. He had graduated from an esteemed university (salutatorian) and had the option of taking over the family business or going to any number of corporations who were wooing him. He composed music on the french horn, volunteered for civic organizations, and sang opera. Total schmuck. I, on the other hand, had nothing but my sense of humor, my rakish good looks, and a handful of fantastic heirloom family pickle recipes. Hardly a fair fight. I won, obviously, but I did not emerge unscathed. For years, even after we were married, Eleanor's father had a favorite saying when he disapproved of something I did (which was often). He would grumble, "I don't think Walter would have done that." Fucking Walter. My self-esteem never truly recovered from him. Gets my dander up just thinking about him.

Enter Mr. Timothy Allen. Turns out this guy has been an aid worker in just about every impoverished corner of the earth. He can speak a brazilian different languages (if brazilian was a language, he would speak that too). He is an accomplished poet, wins fancy awards, is a professor at an esteemed university, a family man, and occasionally translates epic Vietnamese poems just for kicks. He is an ubermench! Rumor has it that he may also be ambidextrous, can juggle eggs with his eyes closed, and has a patent for biodegradable straws. And what do I do? I sit around in my lazy-boy, reading and drinking gin, make the occasional batch of pickles, and rant on the internet, which I don't even fully understand. I can hear Walter laughing from his grave (I actually have no idea if he is still alive, but the math is against him).

Then I started getting paranoid. I wanted to write something about how beautiful the translation was, but it occurred to me that I really have no way of judging that. The closest I ever got to translating anything was trying to decipher pictorial instructions for making kim chi, and that ended with a giant hole in my backyard full of rotten cabbage. So no points for me. For all I know, he could have made the whole thing up. I mean, is there really an ancient Vietnamese word that translates as "gobshite"? Seems unlikely. From there I started worrying about all the other things we just take on faith to be true. Do camels with two humps really live longer than camels with one hump? Is Fun Dip actually fun? Is the Earth truly flat? Is sea salt really saltier than regular salt? Does God exist? This list goes on. So, to summarize, great book, and I look forward to talking to you about it when I emerge from my existential crisis.
Posted by Angry Old Man at 7:10 AM