All the Ugly and Wonderful Things by Bryn Greenwood 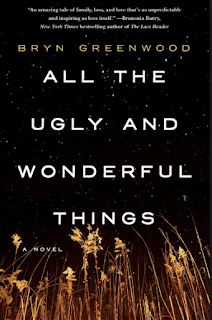 So yesterday my neighbor, Margaret, accused me of throwing walnuts at her house. Can you believe this shit? I have been accused of many things in my lifetime, including vagary, vulgarity, vacuity, slipping a piece of fake ham onto the buffet at a Golden Corral, lying, cheating, stealing, excessive anger, insufficient anger, an appropriate level of anger directed at the wrong person, hurting my grandson's feelings through excessive pranking, acting my age, not acting my age, smuggling a penguin home from the Shedd Aquarium (that is an urban myth!), farting on purpose, failing to return a library book on time, breaking into the Watergate Hotel, malfeasance, disobedience, moral deviance, sloth, taunting a sloth, and jaywalking. First, I would note that I have a plausible excuse for almost half of those claims! I might also add that none of them are nearly as bad as the things that virtually every character in this book does, so stop looking at me like that.

I demanded to Margaret that she present her evidence that I had thrown the offending walnuts, and she told me that she had seen me do it. So, one point for her. However, one must consider the context! The walnuts are coming from HER tree, dropping onto MY lawn, and my assumption is that this was part of a years-long plan she concocted just to fuck with me. I told her as much, and her defense was that a) she didn't plant the tree (possible, but she looks about 130 years old, and the tree does not, so debatable), b) she can't control nature (didn't see her trying, mind you), and c) my response was still unreasonable and not neighborly. I'll let you be the judge of that.

After all, what does being a good neighbor really mean? Some people, in this book for instance, might try to be a good neighbor by taking in the semi-abandoned child of a pair of derelict drug addicts. Other people, like me, might try to be a good neighbor by teaching someone a lesson about personal responsibility using walnuts. Who can say which is the more noble action? These are the kinds of things philosophers have debated for eternity, and answers are elusive. Not convinced? Fine - then I want you to go google "Trump," read the first article that comes up, and see if you are still mad at me for throwing walnuts.
Posted by Angry Old Man at 10:48 AM