Come Back for Me by Heidi Perks 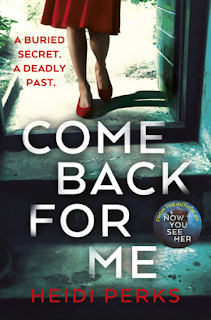 Big thanks to Arrow Publishing and Penguin Books for sending me an ARC of this great summer read. My bunions were really after me last week, and I had shit else to do, so I read it almost in one sitting, as I will explain in a moment. The novel moves quickly, with a plot unpredictable and twisty enough to keep most people off track. I mean, my son-in-law, for instance, won't even be able to tell you who killed whom after he's finished it, but that is admittedly a bit of a hopeless case. I, on the other hand, am a wily son of a bitch and can usually see plot twists a mile away. I know you're not supposed to promote yourself too much in a review, but to quote my second favorite Puerto Rican playwright, "I don't mean to brag, but dag, I amaze and astonish." (Yes, after that debacle, I did actually go see it, and I have to admit that I am a reluctant convert). Anyway, you've got to get up pretty early to sneak a whodunit past me. Remember The Sixth Sense? I was on that shit in scene 2!

Which leads me to another story about sniffing out a nefarious plot. While I was reading this book, really getting into a groove in my la-z-boy, I heard the unmistakable, noxious sound of skateboard wheels. The sound approached my house and then stopped. I looked out my window and briefly saw my grandson's head go past my side window. By the time I lumbered across the room to open the front door, he was gone, with no trace of his villainous deeds. He would later claim that he had seen my rake lying in the driveway and put it away in my garage, but who knows if that is true? After the stinkbugs and everything else, I had cause to assume the worst.

I'll tell you this. I was not going to wait around to let whatever plot he was hatching come to fruition. The best defense is a good offense, that's what I say. So I took action. Jackson has been dating a girl for the last few months, and from what I hear, Rachel isn't too keen on her, so I thought I might make my daughter happy while I got my preemptive revenge. I knew they would be at his friend's graduation party on Saturday, yet another party to which I was not invited. Never mind that I have known that kid literally from the day he was born or the fact that I delivered special birthday pickles to his house on multiple occasions. But I am not bitter. Not in the slightest.

So they're all at the party and what should arrive at the door, but a bouquet of roses addressed to Jackson with a note that says, "Don't worry - our secret is safe with me. Love, X." OK, I kind of wish I had been invited so I could see that shit go down. My granddaughter Tina said it was "epic." I didn't get too many details, but I did have a message from Rachel on my answering machine saying that we had to talk. Calling to thank me, no doubt.
Posted by Angry Old Man at 7:50 PM