The Legend of Jake Howell by Charles Reap Jr. 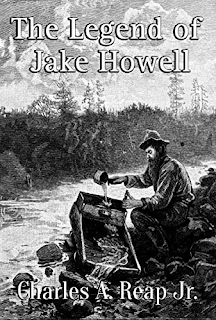 This is a charming story about a young boy in 1805 who discovers gold on his family's land. And lo and behold, all of his problems are not solved! It reminded me of something I read about people who win the lottery. Apparently, more often than not they end up worse off than they were before. You know what I think about that? Bullshit! Show me the money, and I will prove that all wrong! If any of you people want to give me $62 million, I promise you that if I can not find a way to make myself happier than I am now, you will never hear from me again. You know what the problem with these lottery winners is? They're too young! If people my age won the lottery, we wouldn't possibly have enough time to screw up our lives the way young winners manage to do.

First things first - as soon as I become a millionaire, I am going to buy the Vlasic pickle company. Not because I want to own it or get free pickles or anything like that - I am going to shut that shit down! No more terrible pickles for America. Honestly, I get more crunch from the month-old celery in my fridge. Which reminds me, why the hell do I still buy celery? And all those sweet pickles? Truly an abomination. We are going to have a ritual destruction of all of them, like they did with all those disco records at baseball stadiums in the late 70s. That's right folks - Americans made musical bonfires because they thought songs like the 'Safety Dance' were the way of the future. And we wonder why the Taliban hates us.

After the great pickle cleanse, I will take my family on a tropical vacation. Not as a favor, really, but more as an act of revenge. After all those vacations where I had to play along and do what everyone else wanted, this vacation will be on my terms. None of the 'local flavor' nonsense my son-in-law is always going on about. Each day we will have a mandatory mah jongg tournament, and I don't give a shit if we happen to be in Tahiti - dinner is at an Italian restaurant and everyone gets fettuccini alfredo. Deal with it, Gerry.

Now don't get me wrong. I will perform many acts of random generosity - as many as it takes to assuage my guilt at being so rich. So there, I'm already more ethical than half the members of Congress. I may also swim in my money like Scrooge McDuck, but that's my business, so stop judging.
Posted by Angry Old Man at 12:10 PM