Death Among Us by Stephen Bentley et al. 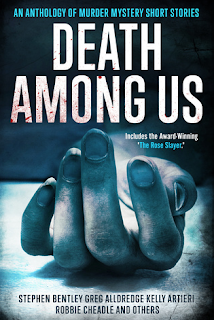 This is a great collection of dark murder mystery stories - just right for the Halloween season. Too much candy, not enough murder - that's the problem with Halloween these days. Anyway, I especially liked the story where the police chase a demented murderer into a cave and they all get eaten by a giant hairy slug-monster. I imagined it like that creature from Stranger Things on steroids. Some scary shit! I could use something like that around here to deal with my neighbor's schnauzer. But you can never find a ravenous, bloodthirsty monster when you need one, can you?

This whole collection got me reminiscing about my childhood because fear played such an integral role in it. I remember lots of scary stories my parents used to tell us. Like the one about don't you dare go near Old Man Palmer's House if you don't want to get kidnapped. Or the one about you had better have all your chores done by the time I get home or I shit you not you will regret it. In retrospect, they seem somewhat less like stories than threats, but there is a blurry line, I suppose.

I'll tell you this - we didn't bat an eye at that kind of thing back then. These days, when all the 9-year-old snowflakes get their mandatory cell phones, they come pre-programmed with the number for Child Protective Services so they can report their parents if they forget to say please when asking them to stop playing video games at midnight. What the hell happened to respect? And Halloween is a perfect example.

When I was a kid, you assembled some kind of costume from what you had around the house and walked up and down the block, collecting a few small pieces of candy and maybe a couple pennies. It was a wholesome community event that brought people together. And now look! If you don't buy an expensive, full body Disney get up, you are the cheapskate parent, and that's if you're lucky. Half the kids out there see Halloween as an excuse to wear the most inappropriate clothing (or lack thereof) that they can find. "Oh bye Mom, I'm going to the party as a sexy clown kitten in a tornado - don't wait up!"

Which is not to mention that it is practically warfare in the streets to obtain insane amounts of candy. When I was still foolish enough to give out candy on Halloween, I would open my door with a bowl and before I could give anything away, I would be practically knocked over by hordes of bloody mutants and sexy fairies ravenously attacking my bowl. And don't even try to set limits on what they can eat, parents, unless you've already deleted that CPS number. Sometimes we have to take it upon ourselves to restore meaning to our societal rituals, so this year I am just going to focus on that feeling of satisfaction I get from that look on a kid's face as you hand him a box of raisins. That, my friends, is the spirit of the season.