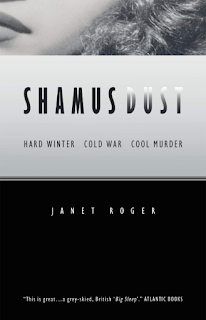 There are people out there trying to get me, and you can't convince me otherwise. This suspenseful,  intricate, deftly written murder mystery just reminded me of how far people will go. I couldn't help but relate to our brusque, headstrong hero, Newman. He's the kind of guy who can be a complete jerk but you can't help but love him anyway. I will admit that I have been described that way once or twice. The other shoe is persistently about to drop in this novel, and Newman justifiably seems to believe that there is always someone around the corner with eyes on him. And I can relate to that too! Just listen to what happened to me yesterday.

It started when I went up to the gas station to get some Takis. Have you tried these things? Not as bad as you would think. When you get old enough to count your taste buds one by one, you need something with a little kick. But that is not really the point. When I got home, the little string I leave hanging down over my screen door was INSIDE the door, definitive evidence that an intruder had been present. Since my children have forced me to have a "hidden" key for "safety" reasons, anyone with a metal detector can now break into my home at any time.

I entered my home slowly (admittedly, this is my default setting), and I grabbed the night vision goggles I keep by the door for emergencies and turned off the lights. Unfortunately, it was only 4:00 in the afternoon, so the sunlight made the goggles useless and probably did permanent damage to my bad eye and my less bad eye. There was a smell in the house, not unpleasant, and I could peer into the kitchen enough to see a foreign object on the counter. It was a kind of small, plastic bucket, and a gentle touch told me that it was still warm, indicating that the intruder had only just left, or in fact was still lurking in the shadows! I listened for a few moments but heard nothing. I opened the bucket and saw what appeared to be chicken soup. It looked and smelled delicious, but I am not an idiot. I considered my options.

My first thought was to run some tests, but most of my lab equipment was confiscated after my snake venom experiments. Did you know that you can buy that stuff on the internet? I knew it was shortsighted to have agreed to dismantle the lab, but a plea deal is a plea deal. With no better option coming to mind, I was left with no choice but to dump the entire bucket down the drain as quickly as possible. Nice try, assassins. You've got to get up pretty early in the morning to outsmart me, and today is not your day!

A followup: This afternoon I received a call from my daughter, who asked if I enjoyed the chicken soup that she made me. I replayed yesterday's events in my head, and I had to admit that this alternative explanation made some sense, although who is to say if she is in cahoots with forces unknown and just checking to see if I was dead yet. I didn't want to outright lie, so I told her that her soup had indeed made quite an impression. Perhaps a missed opportunity on my part, but who is going to complain about a dinner of gin and Takis?
Posted by Angry Old Man at 9:46 AM