The Best We Could Do by Thi Bui 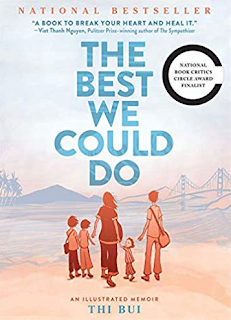 Let me tell you, some crazy shit can happen in a Nashville bathroom. And sometimes the things that happen in our youth can have lasting effects on us, even if we don't remember all the details. This, as it happens, is a central theme of this beautifully illustrated memoir, as the author takes us through her family history in Vietnam and Malaysia and tries to piece together how her early life experience, and that of her parents, influenced the course of her life. But enough about this wonderful book, because it reminded me about this other story, and I'm sure you're all dying to hear it.

As a young man, I happened to find myself in Nashville on Halloween night. The circumstances of my arrival are inconsequential, but I found myself in a full body cow suit in some honky-tonky bar with a bunch of new "friends." I don't know which bar it was, but there was line dancing involved. And there was a crowd of "cow-girls" there that I was drunk enough to believe were interested in my cow-self.

So a bunch of us were piled into this big booth - me, some cowgirls, a pirate, a rodeo clown, and the man from UNCLE. The whiskey we were drinking was worse than the stuff my buddy was making in a bathtub in the shed behind his barn, but it was better than not drinking whiskey, so there you go. At one point, I got up to relieve myself, and when I returned, I had a story to tell. I was somewhat agitated, almost disturbed, but mostly excited to share some shocking news.

"You will not believe what just happened in the restroom," I told them. "It was profound." I started to tell my story, but just at that moment, another round of shots arrived, and we had no choice but to take care of them in the customary fashion. Then the man from UNCLE said something that offended one of the cowgirls. The rodeo clown came to her defense, and in a matter of seconds the table had erupted into fistacuffs! We were all unceremoniously escorted out of the establishment and thrown into the street, where, being Nashville, it was impossible to tell the real cowboys from the Halloween cowboys.

Somehow I ended up face-down in a hammock in somebody's yard, and when we all woke up the next morning, we agreed that just waking up was a victory of sorts. Then one of my friends asked me to tell everyone what had happened in the bathroom, and I shit you not, I didn't have a fucking clue. "But it was profound!," they said, so I spent the rest of the day waiting for it to come back to me. But it didn't! And to this day, I still have never remembered. The obvious questions plague me - what happened? Did it change me without my knowing? Is this why I'm so angry? At this point, I am running out of time and willing to try anything -  hypnosis, psilocybin, sensory deprivation chambers. I would look for witnesses, but the time frame suggests that they are probably all dead. If you have suggestions, email me at imnotreallygoingtolistentoyoursuggestions@aol.com.
Posted by Angry Old Man at 6:42 AM