We Are the Weather: Saving the Planet Begins at Breakfast by Jonathan Safran Foer 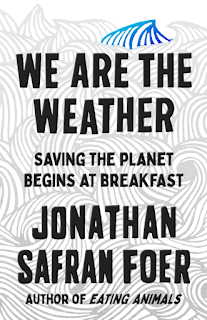 Jonathan Safran Foer wants us to stop global warming by no longer eating animal products. And unfortunately, he makes a pretty strong case that is difficult to argue with. But I'll tell you this - I am not about to let a bunch of facts and rational arguments stop me from eating delicious juicy steaks! I earned that shit, people! But I'll make all you crunchy eco-warriors a deal - I will offset my steak consumption by no longer taking showers. We'll call that a win/win! Showers are a hassle anyway, especially because my son-in-law never got around to installing that shower seat he told he would put in - thanks for nothing, Gerry! You're just waiting for me to fall, aren't you? Anyway, maybe every time I would have taken a shower, I'll just eat a steak instead. It's much safer. Besides, I truly doubt that I will be alive long enough to eat a number of steaks that makes any discernible difference to the climate. I'm afraid this is something that your generation is just going to have to deal with on your own. Thanks, snowflakes!

Also, I hope all you pinko tree-huggers realize that there is some sinister shit happening in the vegetable world as well. For example, are you aware of how mini-carrots are made? I always assumed that they had spliced the genes of a carrot with those of a chinchilla or a pygmy hedgehog or something - I mean, what isn't a GMO these days, right? But get this, those are just - I shit you not - regular carrots! This is the most shocking revelation since Soylent Green! Apparently, they just shave those normal carrots down until they're tiny, because Americans are too damn lazy to peel their own carrots or to eat something too large to put in their mouth all at once. The amount of waste inherent in that process is mind-boggling. And it is pretty sad to realize that mini-carrots are not an agricultural advance, but just the impotent, empty shell of a once-proud species, like a neutered dog or a moderate Republican. So don't lecture me about my well-marbled t-bone.

Here's the craziest thing that ever happened to me involving a mini-carrot (it was tough to narrow this down, mind you). One time, when I was pissed at Gerry (deservedly), I threw a mini-carrot at him across the room (you'll have to trust me that this was an appropriate response at the time). Somehow I missed, and the carrot landed in the garbage can and impaled itself lengthwise on the open end of an envelope, like it was getting a giant paper cut, and it stayed upright on the envelope on top of the garbage. OK, now that I re-read that, it doesn't seem as amazing as it did at the time, but at my age you don't always have such crazy stories, so cut me some slack, eh? And still, what are the odds of that happening? I bet if I gave you 100 mini-carrots, you couldn't do that once. Any takers? That's what I thought. OK, steak time.
Posted by Angry Old Man at 7:45 AM