Evil Geniuses: The Unmaking of America by Kurt Andersen 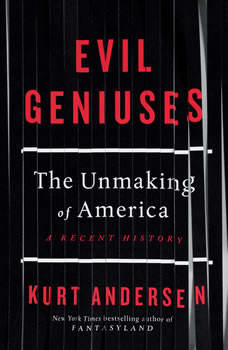 So many small businesses going under because of COVID, and still, Vlasic survives. Mr. Andersen explains the system in more detail, but that's all the evidence I need to know that there is no justice in America. And they won't return my calls either, unless you count the Cease and Desist letter I recently received after giving them the basic outline of my Free the Pickles! campaign. But I don't mind standing up to powerful enemies. After all, this is America, and that is what we do.

Now that the election is over, I'm hearing all this talk about unity and healing and coming together. Can you believe that bullshit? Unity is not what we do here. Coming together is not what we do here. In fact, there is nothing more American than the belief that someone is out to to get us and we are being screwed. The only question asked more frequently in this country than "Do you want fries with that?" is "Can I sue them?" If people came together and treated each other the way they wanted to be treated, we wouldn't have a damn clue what to do with ourselves.

The truth is, we define ourselves by what we are against. You've got your anti-fascists on the left, anti-socialists on the right, and anti-Vlasic patriots all across the political spectrum. And we thrive on these divisions. People from other countries say Americans are fat, uneducated, imperialistic assholes, and instead of defending the country as a whole, we're like, "Oh, not us. You mean those Americans." It's those Northerns/Southerners, or those city/country folks. Even within the town where I live, we pretend that eastsiders and westsiders are different species because of the relative length of their beards and the odds that they would enjoy a nice felafel. It's like the only way people can know who we are is by knowing who we are against.

Which is why I will not be accepting my neighbor Margaret's invitation to have coffee this weekend. Who the hell does that lady think she is? Apparently, she misinterpreted the bag of penises I left on her doorstep as some kind of peace offering (full story here), and now she thinks we are going to be friends. Hell no! If people see me going over there, they'll think I'm one of them! And whatever they think that is, I don't want to be associated with it. Not in MY America!