On Tyranny: Twenty Lessons from the Twentieth Century by Timothy Snyder 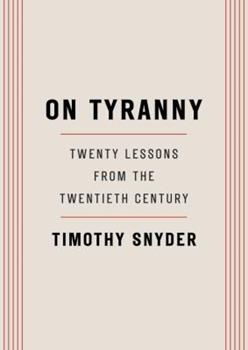 I believe that it is the responsibility of the older, wiser generation to teach you younger folks about our history, so you don't repeat old mistakes with regard to our government. But based on what has been going on in this country lately, it seems like either we are doing a shit job teaching, or you fuckers aren't listening! So I invited my grandson Jackson to come over for some bagels and a history lesson, as long as he promised to stop by Dollar General on the way and buy me some toilet paper. It's like a war zone in there these days, what with all these Covidiots and their hoarding - last time I had to beat away a crowd of children with my cane just to get the last package. It didn't feel great, but better than wiping your ass with a towel.

My two instructions when Jackson arrived were to put the toilet paper in the bathroom and not to hog all the lox. But we never got to step 2 because of what Jackson did next. I knew something was up because of how long he was taking in there, and after a minute or so, he comes out dangling a loofah and asks me - I shit you not - "Grandpa, did you have a lady friend in here?" I could hear my sweet Eleanor rolling in her grave - not at the preposterous idea of me dating at my age, but at the fact that our grandson was snooping around our bathroom! I told him that when he gets as old as me, he'll be lucky if he can still stand up in the shower, let alone wash himself, and I reminded him to mind his own damn business. But the reality was that instead of explaining to him how he and his father (and the rest of their generations) were ruining America, I now was in a position to have to defend my own personal hygiene choices.

The case for the loofah should be open and shut just based on frugality. If you are using liquid soap (a necessity if bending over to touch your toes is a reminiscence from another decade), using only your hands leads to the soap washing away too quickly and having to use more and more. The loofah, however, maintains a bubbly lather from a small amount of soap that you can use for the whole shower. And as you get older, making sound financial decisions is paramount. I estimate that in the past year, the loofah has saved me enough money to buy 6 scratch-off tickets, with which I have almost won untold thousands of dollars. So there you go. Which is not to mention that the loofah helps create a soothing aroma of freshness, exfoliates my iguana-like epidermis, and I rather like the way it feels on my bunions.

Furthermore, to address the sexist nature of my grandson's question, I would refer you back a couple of decades to when Ironhead Heyward clearly demonstrated that loofahs are appropriate tools for all genders. Case closed. My similarity to Mr. Heyward in terms of physique is only a coincidence. Anyway, this was the basis of the first part of my loudly delivered lecture to my grandson on American culture. So he could fully appreciate the current phenomenon of Cancel Culture, I have (once again) banned him from my house for an undefined period of time. At least until I need more toilet paper.